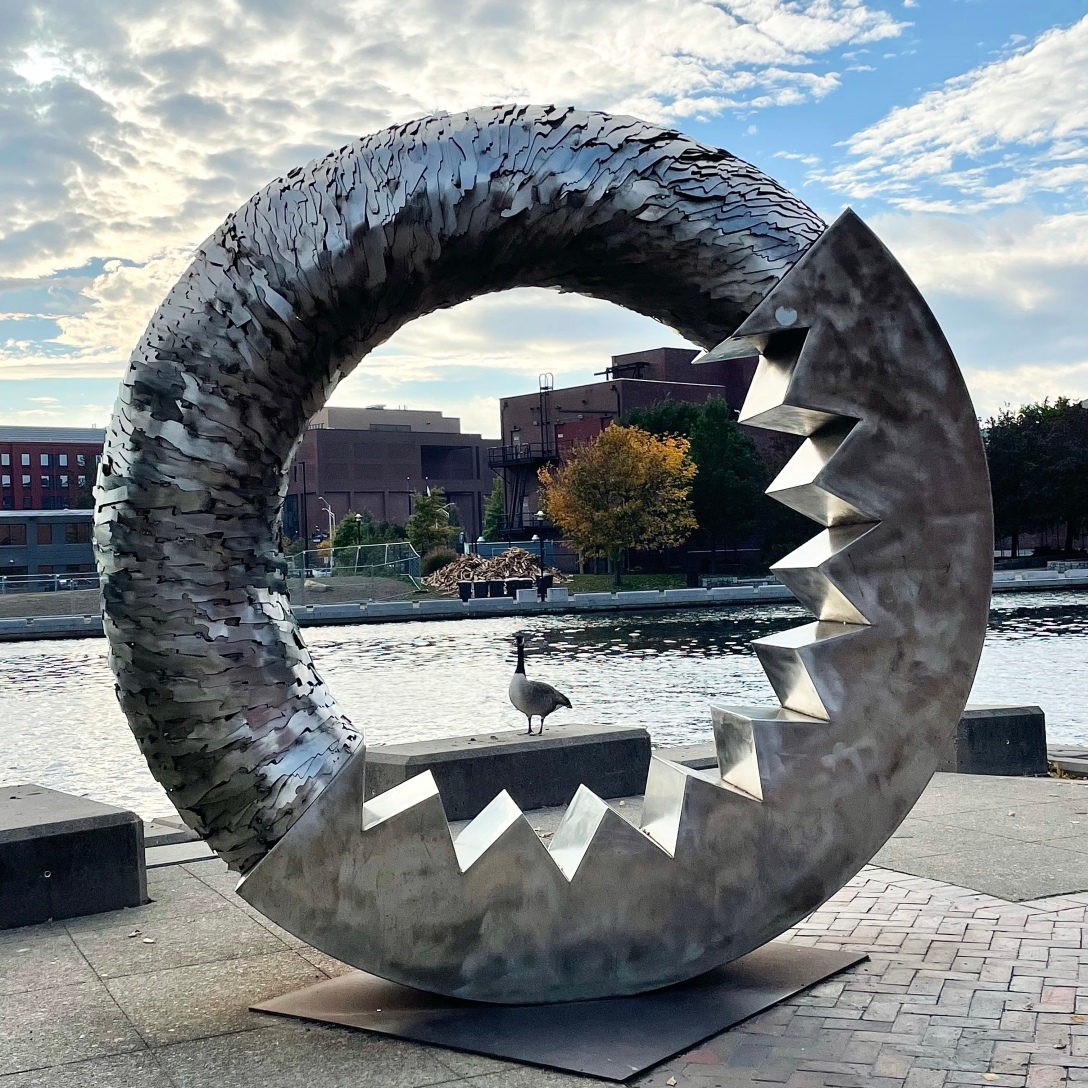 Featured Image: “Textured Gear” by Rob Lorenson on the Providence Riverwalk. Also known as (to me and only me) “Portrait of a Goose”

I recently watched the first season of How To with John Wilson and I highly recommend it for those who appreciate artistry, and comedy, and documentaries, and videography, and heartwarming stories, and weird stories, and tangents, and if you have ADHD.

Though I do not have thousands of hours of footage to edit together like he does, I do have the time to write something in a similar fashion.

This is: How to Make a Decision

I have never been able to make a quick and simple decision in my entire life. I can’t decide what to eat, or what to wear, or where to get a drink, or what movie to watch, or what pair of sneakers to buy, or who to date, or where to live. I am crippled by decision-making every day of my life; Much like Chidi from The Good Place. It takes hours of my life away, this deliberating, and eventually, my indecision might kill me just like Chidi’s does.

Some decisions need to be made with gut instinct, especially time-sensitive ones like whether or not you can make that traffic light before it turns red. You can convince yourself that your gut is trustworthy and dive right into the first decision you feel like you can cling to long enough to believe it but not too long to doubt it. This, however, usually only works for low-level and short-term choices like food, outfits, movies, and driving.

For those of you who like to take your time making a decision, there’s usually an order of operations.

The first step of deciding things like purchases, restaurants, and things where money is on the line, is research. Thankfully, the decision of which search engine you’ll use to begin your research has essentially been made for you, because what insane person is still using Bing or Yahoo. Google is the almighty God who can tell you anything you want and usually confirms your biases and decisions unless you yourself have doubts about said decision. For example, looking up reviews for a certain product. There will be plenty of reviews boasting that this was the best purchase they ever made. But if you have your doubts, you will read the negative reviews, and the one guy that says “DO NOT BUY!!” convinces you that this is not the right choice.

You might spend hours looking at Amazon reviews, and specifications, and lists, and articles, and youtube reviews, and you will be so overwhelmed that no purchase will be made and no new restaurant will be picked.

The next step is usually deciding to ask someone you know who knows a lot about the thing you are looking for — a second opinion. You might ask a general question, like “What’s the best TV on the market?” And they might tell you it’s a 65 inch OLED 8K Samsung. But you were thinking more of a 50 inch and you wanted Roku. And so you say thanks for the recommendation! And you do not purchase what they recommended. They then might tell you about their new speaker set-up that they spent thousands on, but you don’t really care because you’re not making a decision on a speaker system, and adding that to the mix would make things even more complicated than they were before.

So you decide to ask someone else who has less technical knowledge but you know they bought a tv recently — a third opinion. They say they love their $2300 TV that came with a free VR headset but you didn’t want to spend that much so you say thanks for the recommendation! And you do not purchase what they recommended. They keep telling you about the VR headset though but you must stay strong. One decision at a time.

You then might decide to make a pros and cons list of all the options you have, after deciding on which pen to use, and which paper to write on. Sometimes pros and cons lists can be helpful; if you are struggling to find cons, that means you’re on the right path. And sometimes you find that you can only list cons, which takes out some options but doesn’t give a final answer. And sometimes you’ll see that you have equal amounts of pros and cons, which means you’re not any closer to making your decision.

As a last-ditch effort, you can decide to just pick pieces of paper out of a hat. You must commit to this, however; if you pick something out of the hat and you do not comply then this will not work. And even if you do commit to the bit, you might have FOMO and still be thinking about that other option you threw in there that you secretly were hoping would be chosen.

This may have you thinking, is there any right way to make a decision? Is there a surefire way to make sure that you make the “right” decision? The answer is…probably not. One of the biggest issues with making decisions is the oversaturation of the market, which is best described using Tinder— there are so many options, that you tend to be pickier, and tend to not really pick anyone at all. This also happens on Amazon— so many options and they all seem “fine” but none seem “best”. This is, of course, capitalism and the internet’s fault.

In the end, you might end up exhausting yourself into a decision, and you might settle, but at least that’s better than not making one at all. There will always be something better out there, but don’t kill yourself trying to find it.

If you don’t have Hulu or HBO to watch How To with John Wilson, use a website called Soap2day. Season 2 comes out on November 26th.

1 thought on “How To: Make a Decision”