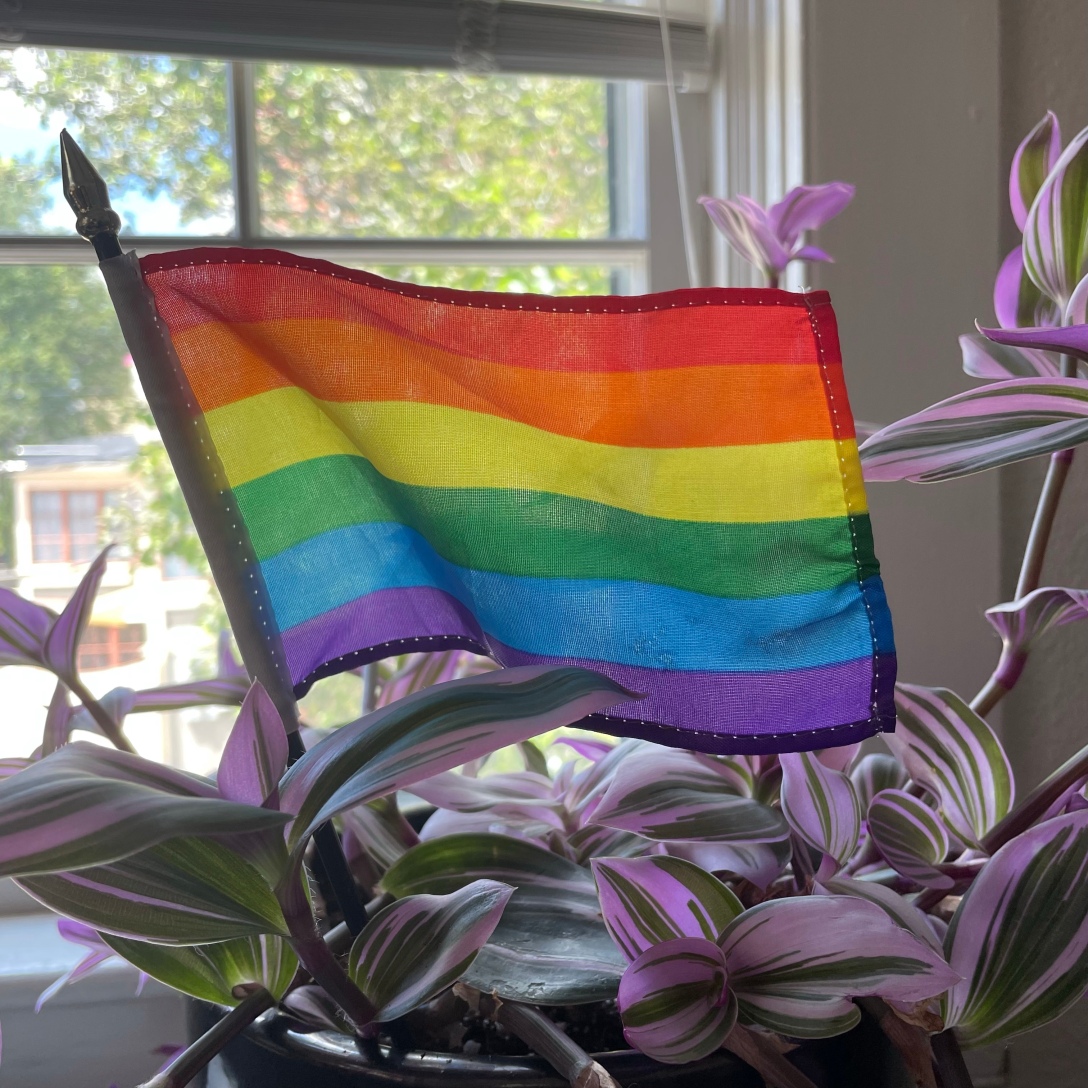 Featured image: My little pride flag in my Tradescantia with the view from my office in my new apartment.

I had a very busy month. I moved into my new apartment, I went on a vacation to NJ, and I watched Bo Burnham’s “Inside” which had an emotional toll I did not expect. I wrote this post the first week of June and every week I got too busy with work and life to edit it. I even contemplated not posting it because it felt so personal.

I met the first girl I ever liked, though didn’t know it at the time, in high school. We were the best of friends. We were intimately close; closer than I had ever been with anyone and I just thought that was because we were so alike and had so much fun together. I thought our physical expressions of affection were completely normal for two best friends.

It wasn’t until after I lost her did I realize that my feelings were different. I lost her because of a fight between me, her, my boyfriend at the time, and his friend who was dating her. His friend cheated on her. His friend told my boyfriend. My boyfriend told me, with the agreement (threat) that I could not tell her. I told her, obviously, but I asked her, for the sake of my relationship, that she break up with him and not mention the cheating. She thought I was choosing him over her. She ripped off our friendship necklace and our relationship never fully recovered. It is the biggest regret of my life.

The first person I came out to was that high school boyfriend. His response was (and I will never forget it, nor get over it, as you’ll see later): “great, now you’re twice as likely to cheat on me.”

I did not come out again until college. I was in a suite of 8 girls, and we had gotten on the subject. I was the only one to admit that I liked girls. The reaction wasn’t good nor bad, but I remember worrying that they would feel uncomfortable around me. Interestingly enough, half of those girls have since come out as lesbian or bisexual.

I didn’t have my first girlfriend until my junior year of college. We were “together” for maybe a month and we spent Valentine’s Day together. I liked her. Unfortunately, I was in the middle of a mental health crisis, and I went home for a week without telling anyone. When I came back, it was presumed that we were done. We never spoke about it.

When I had gone home, my parents asked me what I did for Valentine’s Day. I nonchalantly said I spent it with my girlfriend. They didn’t even react. And for some reason, it irked me that there was barely even a response. Later, my mom would confess to me that she “had a feeling” that I liked women because of the relationship I had with my high school best friend.

A little over a month ago, after having sex with someone and having a feeling that he did not see me as anything but a hookup, (*cough* I saw that he had texted his ex-girlfriend “I love you” 15 minutes after we had sex *cough*) I brought up intentions. He told me he wasn’t looking for a relationship, and I shrugged and said that was okay, as I intended to have a “hot girl summer”. He asked if I was “going to have sex with a bunch of dudes” and I laughed and responded, “actually I want to have sex with a bunch of girls.”

He was taken aback, and responded with: “I could never date a bisexual girl.”

He got up to go to the bathroom. I kept asking him why, as I began to get angry; his bigotry needed a reason. He finally said: “I feel like they would never 100% like men.”

I’ve been struggling with that statement ever since. Bisexuality is very confusing because society wants you to pick a side. I feel like I have to inevitably pick one or the other. Sometimes when I picture getting serious with a guy, I get sad thinking I may never be able to be with another girl. Sometimes I question whether I’m just a lesbian but society tried to raise me straight and so now I’m just confused. Sometimes I think I’m just straight and society just raised me to fetishize women. Sometimes I think that stupid boy is right and that I will never be able to love anyone.

The sex wasn’t even good. Like how are you going to be a bigot AND bad at sex? Pick a struggle dude.