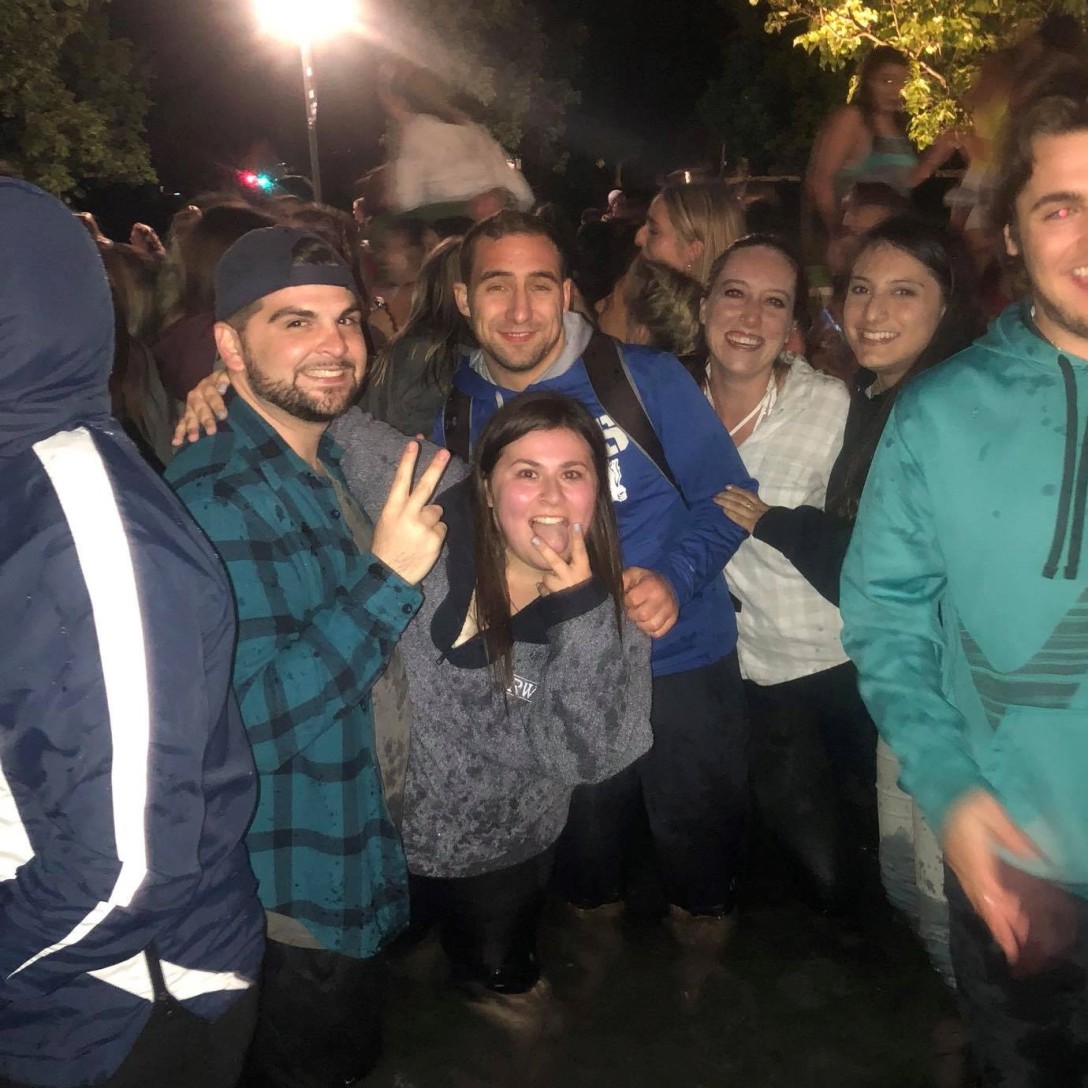 Featured Image: Me and my college friends at our senior year “fountain jump” at RWU.

Since none of us have been to a party in a while (or at least I’d hope you haven’t been), I wanted to share an old story I wrote back in college to remind you of how ridiculous parties are:

The Seven People You Meet At A Party by Andria Grant

The first person you’ll meet is the most intoxicated kid at the party. You’ll know who it’s going to be as soon as you get there because he’ll be the one who is most excited to see that you’ve arrived. He’ll have a whole bottle of something like Hennessey or Captain, and he will try to get you to take a sip because you “need to get on [his] level bro.” He’ll be the kid who yells “CHUG! CHUG! CHUG!” every time you go to take a sip of your beer. He will probably break something. He will probably take off his shirt or at the very least unbutton it. By the end of the night, you’ll find him half-conscious on a recliner with a plastic bag next to him, while he keeps saying “I’m fine, I’m fine” until his DD comes to carry him fireman-style to the car.

The second person you’ll meet at a party is the sexual predator, the creep, the skeezy guy who gets off by making girls uncomfortable. He will be wearing boat shoes with no socks on, probably a blue button-up, and likely khakis. You might not actually meet him, or see him either because he will come up behind you and just start dancing with you—and I use that verb lightly since it is really just him trying to grind his member on your ass, (which, “looks great by the way,” he’ll say). You will try to get away by putting friends in between you and him but he’ll find you, eventually, and this time he might even try to talk to you. His name will be so white-boy that you’ll forget it immediately, and when he asks for your number you’ll punch in all the right digits up until the last one, and tell him “I’ve got to go find my friends.” You see him later going home with another girl.

The third person you’ll see is, goddammit, it’s your ex. Why do they seem to pop up everywhere? And if it’s not your ex, it’s one of your friends’ and now you’re suddenly a six-foot bouncer ready to throw out this kid if he says a single word to your friend. But they probably won’t, but they will make just the right amount of eye contact to make you uncomfortable. No one else will want to get in between that, and so no one talks to you. He will leave early and probably tweet something about these ‘dumb ass hoes’ and ‘fake bitches’ or whatever slur white boys use these days to talk about women who won’t have sex with them.

Once you get away from making awkward eye contact with both the sexual predator and your ex, you’re going to bump into someone who is way too goddamn sober for this shit. They’re the DD that night and they’ll tell you that, for some reason, jumping around and getting sweaty is just not as fun when you’re sober. They will mention, multiple times, that they are sober and that they’re the DD, looking for some kind of medal of honor for taking one for the team. They will regret offering sobriety, so they’ll probably smoke a joint with you and the

guy smoking the most weed. Everyone will flock to this guy at some point, looking for free drugs. He’ll have a small circle around him sitting on the ottoman with a rolling tray. The guy rolling will look like Post Malone and you’ll wonder if herpes can be spread by sharing smoking apparatuses, but you keep inside the circle anyway. A freshly rolled joint will make its way two-thirds around the circle before it’s too small to hold, due to the excessive number of heads on it, and you probably won’t get a hit. Someone will want the roach. You’ll leave the room and realize you might be contact high. You’ll look in a mirror in the hallway to check your eyes and you won’t recognize yourself.

It’s getting later in the night and your bladder is about to explode. It’s time to break the seal. After locating the bathroom you’re going to wait about fifteen minutes. All the guys will have started peeing outside in the bushes because the bathroom is always taken, but if you’ve got to sit, you’re waiting in that line. You’ll watch four girls go into the bathroom together. This is when you meet the drunkest girls you’ve ever met. One will invite you to pee in the bathroom with her and her friends, and you apprehensively agree to join. One will tell you how much they love your shoes. One of them swears that they recognize you, but you’ve never seen this girl in your life. One will lend you a tissue from her purse when you notice there is no toilet paper.

The last person you meet at the party is crying alone in one of the rooms upstairs. You only come across her because you’re looking for some peace and quiet so that you can call for a ride. You’ll ask her if she is okay, but she is clearly belligerent, and clearly not okay. You’ll sit down with her, exhausted. You’ll give her the water bottle you were saving for your ride home. She tells you she and her boyfriend got into a fight and he left her here without a ride home. You’ll tell her you’ll bring her home if she never gets back together with him. She obliges, and you trade social media handles. You never speak again, but you see on Instagram that she got back together with him.

If you’re lucky you might bump into an older man, at least in his fifties if not older. He will be holding a dark rum or other liquor in a glass. He’ll look lost, like he was looking for the bathroom and he accidentally walked into a fucking rager. His motive for staying is uncertain. You’ll talk to him because you’re curious and he’ll tell you some random story that you can hardly follow but he tells it with such enthusiasm that you can laugh and nod in the right places. He might try to hook you up with his son. You will smell his boozy breath and Old Spice 4-in-1 soap.