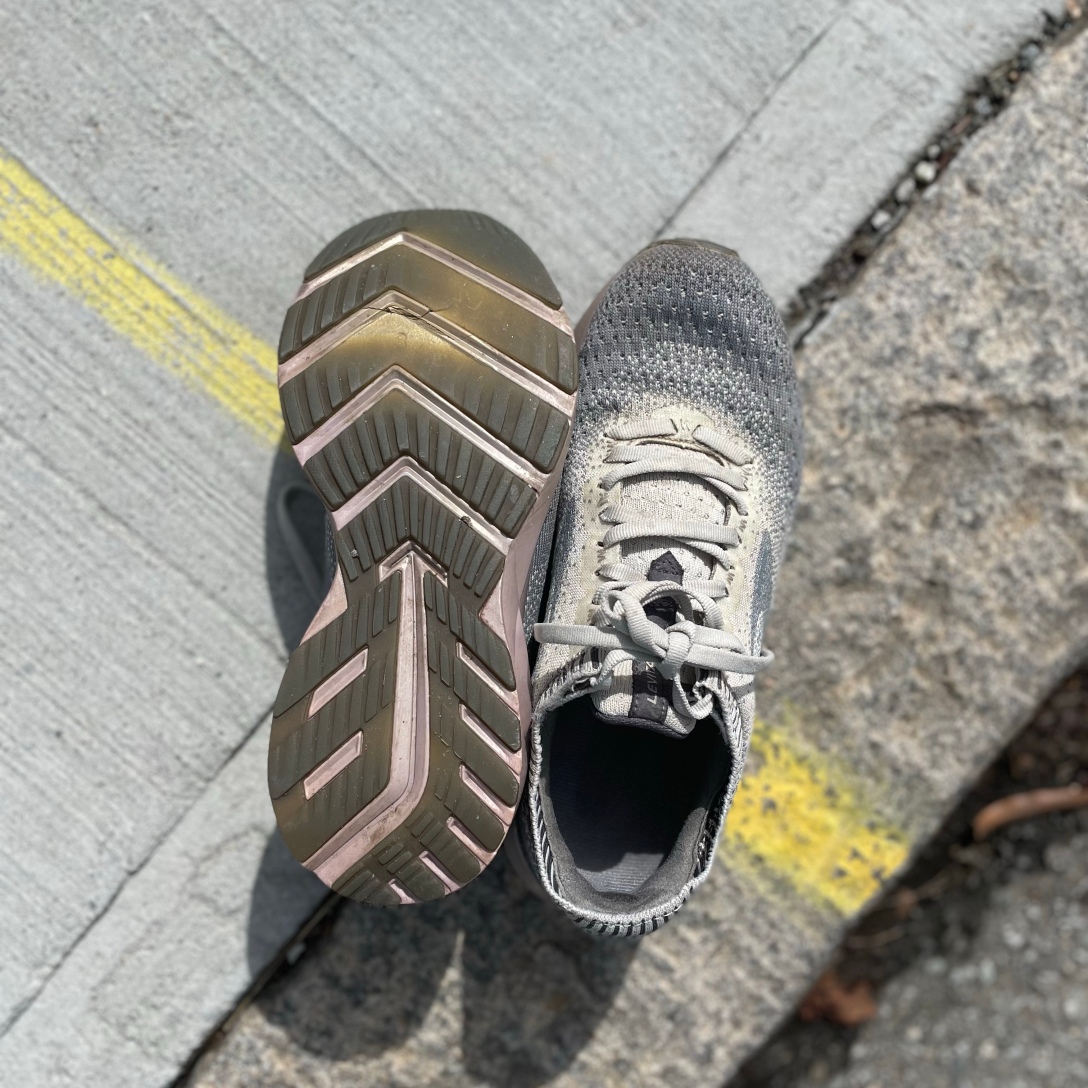 Featured Image: A picture of my worn sneakers from quarantine.

I’ve been having trouble writing one full blog post about one complete topic without that topic being incredibly depressing and malformed. So I’ve decided to just combine all the depressing snippets I’ve been writing in my notes app in the wee hours of the night that couldn’t mature into a full post by themselves. Enjoy.

Ode to My Sneakers

I nearly cried when I realized my Brooks running sneakers had finally worn down so much that I could no longer run in them.

Their final run was up and down the Providence River, over the expensive pedestrian bridge, and past the ducks, swans, and geese. My feet hurt badly and so when I got back, I peeked at the bottom to see that they were cracked and so worn the grey tread was nearly completely gone.

I bought the sneakers in April of 2020 when I started working from home due to covid. I was worried about getting out of the house enough and so I started walking during my lunch break. It was my only time out of the house for months. I’d never been a runner but that year I began to run every day, sometimes before dinner, too. I was healthy and happy, and I slept fantastically; I’d never felt that way in my entire life.

When I moved out and got my new job, my lunch break went from 1 hour to 30 minutes— only enough time to eat. I stopped running. And when I lost my job, I still didn’t run. I had lost it.

On my sneakers’ last journey I thought I had finally convinced my body to run again, and even though I was out of shape and out of breath, I was happy.

Until my shoes let me know that it was over for them. I had to move on; It was never going to be the same again. If I wanted to run again, I would have to buy new sneakers, find new routes away from home, and put in the time to do it.

I still haven’t found new sneakers, but sometimes I take them for walks, cautious to not put too much pressure on them. But that’s okay for now, neither of us is ready.

“Could you help me with something?” she asks, sitting down in the chair next to me.

“Of course, my dear”

“I think I’ve found an important piece of mail. Could you read it for me?” From her aged hand appears a very folded and crumpled piece of paper. As I unfurl it I hope it is unimportant and impersonal, but I’m glad to be of some help.

Finally unfolded, I laugh and tell her it’s just some junk about moonstones, but she has me read it anyway because she had been gifted some moonstone jewelry from her granddaughter and we may as well learn about it. It details moonstones’ ability to give the wearer “balance” and “visions”.

She snorts, “Well it didn’t work did it?”

An Average Day in the Life of the Unemployed

What no one tells you about having so much time on your hands is that time becomes meaningless, and moves faster than you’d think. Hours, days, weeks pass in blinks of an eye when you spend most of your time in bed, sometimes asleep, sometimes in a deep trance of thoughts and daydreams.

You end up getting a routine going, something my therapist said would help me, but the routine isn’t the healthiest. You get out of bed around noon and have your first meal. Then you lay down again and wonder what you’ll do, and by the time you decide, it’s 2 or 3 o’clock, and it feels like the day has already been wasted. You do your one silly chore or errand and then eat dinner. You watch tv or play video games until midnight, which soon becomes 1am, then becomes 2am, and suddenly you can’t fall asleep until 3am (I wrote this at 3:20am). Your thoughts keep you up, and because you barely got out of bed and barely moved your body, you aren’t tired.

And waking up has become terrifying. You postpone opening your eyes in the morning because it feels too real. You try to stay in your dreams and daydreams as long as you can to avoid the pressure of the open day.

Every day you have to figure out how to spend your day without spending any money. You figure out how to stretch your grocery haul while also convincing your picky stomach to eat what it can get. Every day you get emails about jobs that sound like you’d sooner put a bullet in your brain than work for another “fast-paced” “we’re a family” “other duties as assigned” nightmare.

I thought I’d buy a house with the money I’d saved up, and every day I have to forgive myself for using it to survive.

Taking care of your mental health is like owning a car. You take care of your car; you change the oil, put air in the tires, give it a wash. But no matter how good you take care of it, sometimes it breaks down anyways. And so you put it in neutral and you push that car back into your driveway. You tinker around and find that you just needed to give it a jump, and look at that, it’s good as new.

And so you drive again, and it’s good for a while, but you break down again, this time further down the road. You ask a neighbor for help and they’re glad to give you a jump, and you make it back home.

But the next day you need a jump again, and your neighbor is too tired to do it for you, and you wonder if maybe there’s a problem with the battery; maybe you need a professional’s help.

And so you bring it to a mechanic and they fix it up for you and they remind you how to take care of your car so this doesn’t happen again. He charges you a bunch of money though, and the car still breaks down, over and over again, and finally, he tells you he’s done everything he can for you.

But unlike a car, you can’t just get a new brain and so you have to just put in the work every day to take care of it, even if it takes some help.

The Squirrel and The Bird

We were about 13 when we saw a squirrel fall from a tree, a very tall tree. I’d thought squirrels were kind of invincible to such a fall, but this squirrel was frozen on the ground and we realized it had suffered more than we thought. It wasn’t dead, as we saw it twitch, but it sure wasn’t getting up. My friend was immediately in tears, hoping to save the squirrel somehow. She called her father, who solved all of her problems for her, and he said to kill it with a shovel. I knew my friend would not commit murder and so I offered to do it. But just as we headed towards the shovel, a cat came out of nowhere and snatched the squirrel in its mouth and ran into the woods, and in pursuit of the cat was a dog. The circle of life, I said. Our problem was solved.

Over 10 years later, we had a similar experience. I had texted her that day that I was stressed about work and too depressed to make myself dinner, she hummed and hawed but said I could come over. And so I did. And when I did, I sat down on the couch, ready to lament about my day, but she immediately spoke for two hours about how everyone in my life didn’t like me.

She offered to buy me vodka to sanitize the wound she had created. I was still in shock and so I agreed to walk to the liquor store.

As we walked down the road, we came across a baby bird that had fallen from its nest. The nest, too, had fallen, as well as its sibling, who looked to have suffered a much worse fate. My friend stopped and immediately made it her life’s purpose to help the bird. We could tell the bird was almost full-grown but its fluffy fledgling feathers didn’t seem up to the task of flying away. She googled relentlessly, trying to find out what we could do to save the bird. The bird was peeping for its mother, a sign that, if the mother came back, she would take care of the bird.

My friend wanted me to stand on her shoulders and place the nest and the bird back in the tree but I had my doubts about the success of that operation. I told her that since it was still alive and peeping, we should continue onto the store, and if it was still there when we got back, we would help it. I secretly hoped the bird would do me a favor and fly away because otherwise, we’d be there all night.

So we continued our journey to the liquor store, and she bought me the promised bottle of vodka. The trip was quicker than anticipated and we were walking back towards the tree already.

The bird was, of course, still there and still peeping. My friend was plagued by her empathy and again would not leave the bird. I brainstormed and suggested we either take the bird home ourselves or knock on the door of my old art professor since we were right in front of her house and she seemed like the kind of woman who would raise a baby bird. This solution was still not what she wanted but I was not sure what she wanted, and I wasn’t sure that we could help this bird at all.

But because its sibling looked as if it had been crushed by a negligent pedestrian, I decided the best we could do was move it out of harm’s way. She did not want to do this herself, but I just wanted to go home and so I picked up the baby bird, wet from the rain, feeling its boney little body nearly crush under the gentle grasp of my hand, and tossed it under a bush in my old art professor’s yard. The bird was close enough to the tree she fell from that maybe her mother would still hear her peeps for help.

We walked back, and my friend announced as we walked in the door that WE had saved a baby bird as I washed the bird off my hands. I wanted to say that WE did nothing; that I may have saved it from a more gruesome demise than what was coming for it but I did not save it from death itself.

I didn’t actually get to take home the bottle of vodka, it was only for when I was over and had nothing to drink. But after deciding that I no longer wanted to be the all-in-one scapegoat/problem-solver/shoulder-to-cry-on for no pay and no benefits, I never even got a drink out of it.