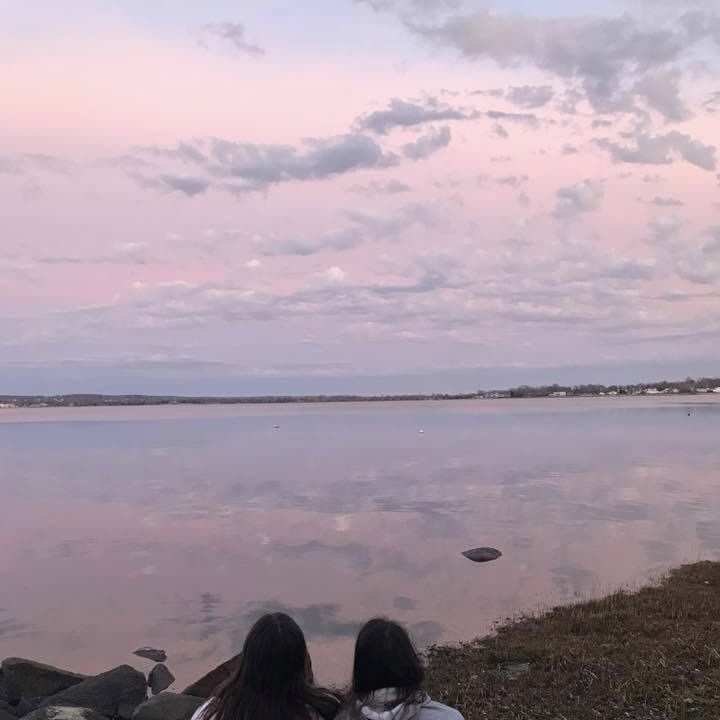 Featured Image: Me and my best friend from college, looking at a gorgeous sunset over Mount Hope Bay

In continuation of last year’s Valentine’s Day post – “I’m Dark Chocolatey Bitter About Valentine’s Day” – I’m dark chocolatey bitter about how the media affected my perception of love from a young age.

I started writing short stories in 5th grade and pretty much all of them were about love. The first couple was Nicola and Nicholas (Nicholas died in Iraq and was replaced by another guy for some reason halfway through the story). In middle school, I wrote a story called “Mac n Cheese Kisses” where two 13-year-olds fall in love when their families rent adjacent vacation homes (wishful thinking on my part). I also wrote what can only be described as Twilight fanfic, in which the main character has two love interests, Max a vampire and Jonny a werewolf, who were both deeply devoted to her.

But having been, ya know, 10-12 years old, I had even never kissed anyone, nevertheless had a romantic connection. In fact, in 5th grade, I didn’t even know what “going out” meant. So where did I get these ideas?

I got those damn ideas from fuckers like John Green with his manic pixie dream girls and emotionally stunted boys, and Stephanie Meyer with her romanticization of someone literally watching you sleep, and Jay Asher with his glamorization as well as downplaying of suicide while somehow also making it seem like Clay’s love could have saved her, and Sarah Dessen with her, well, everything, and Melissa Marr for making me think I could have a faerie boyfriend that won’t take no for an answer when he asks me to be his Summer Queen. It’s why I thought relationships were hard and fast and why fights were just “lovers’ quarrels”. It’s why I thought guys could fall in love with a girl after hanging out like once. It’s why I thought that when someone cares about you a lot, they take up your whole essence, and even try to control your life “for your own good”.

And it’s not just books; it’s movies, too. Every girl in an indie film who has obscure interests and dyed hair is suddenly a manic pixie dream girl (a particular ‘fuck you‘ to Scott Pilgrim vs. The World, though that was the point of the original comic). Almost every Disney princess movie has a damsel in distress, and some beautiful man saves her and falls in love with her instantly. Every romcom has enemies to lovers (gag) or friends to lovers (see my post: Why Can’t We Be Friends?), or starts with a lie (Holidate, The Proposal, How To Lose a Guy in 10 Days, Love Hard, 27 Dresses), or one of them makes a mistake but makes it up with a grand gesture (10 Thing I Hate About You and Say Anything)– and the thing we’ve learned from those awful tropes? Doesn’t matter if you hate him, want him to be your friend, he straight-up lies to you, or he makes a huge mistake… none of it matters if he’s cute. BUT the guys in these movies also do way more to make up for their malfeasance than most guys in real life do. Which, leads us impressionable young folk to A) Give people too many chances and B) Still expect them to do something grandiose to make up for it.

And the music of my youth, too! Bruno Mars said he’d take a grenade for me but now he’s calling me a bitch in his new song with Anderson Paak (even though he can totally afford to pay my rent). Don’t even get me started on Taylor Swift and her t-shirt-wearing ass. I’ll never forgive Death Cab for Cutie for “I Will Follow You Into the Dark” — I mean “someday you will die but I’ll be close behind” like god I love you too but don’t kill yourself for me mate. “She Will Be Loved” made me think I’d one day be loved and “You’re Beautiful” made me think that love at first sight was possible. Even Jason Mraz, though he’s got a really punchable face and persona, made me think that being loved is my god-forsaken right. “You and Me” by Lifehouse and “Chasing Cars” by Snow Patrol? I mean, come on! My perception of love was ruined by the soft-rock of the early 2000s.

Now, I am still like 12-year-old me in that I do not have much romantic relationship experience. My longest relationship was emotionally abusive and I truly blame the media for the preconceived perception of love that made me believe I was in it– the “I can change him” trope, the “love takes work” trope, and the “controlling means he cares” *cough Edward Cullen* trope. No, he was just a dick and no amount of trying was going to make that relationship viable or healthy.

But, due to my lack of romantic experience, maybe I’m wrong. Maybe those songs, movies, and books written about romantic connection are based on lived experience and real emotions. Maybe the boombox scene in “Say Anything” actually happened and was proven to have worked.

While I’m sure there may be textbook-like examples of love that match what we’ve been taught through all these romcoms and YA novels, all the relationships I know, there was no grand gesture or gift, there was no pining, there was no grandiose mistake that was somehow remedied, and definitely, no one did the whole enemies to lovers thing. You meet someone, you hang out, you decide you like each other, you hang out more, and then you either break up or you get married, and hopefully he does something special for your engagement.

Since being a naive preteen and teenager, I have given up this false narrative of love (through multiple lived examples) and have stopped writing love into my short stories (except as a plot device to show the failures of the main character– oof projection much?)

I expect bare minimum effort. I don’t expect men to just know what I want, because that’s not fair. Though, having to ask for flowers negates the purpose. And, even worse, asking for something small and not even getting it (like a massage or a Gatorade, and yes these are recent examples).

No knight in shining armor is going to save me, no one is writing an article about me and needs to take me on a date so his boss won’t fire him, no one is going to play music outside my apartment, or write me love letters from the past (or is it the future?), or build me a house because I once said I wanted one with blue shutters (I can’t even get a blue Gatorade, sorry, still mad about it), I will never be in a love triangle in which two men love me endlessly and I couldn’t care less because I have to save the world. If I fall in love it will be in the most boring way possible and that’s okay.

He was already going to the store like come on, grab me a Gatorade.

I told my friend I vaguely regretted ending things with Gatorade boy before Valentines Day and she reminded me he would’ve disappointed me for that too, so, that’s fair.