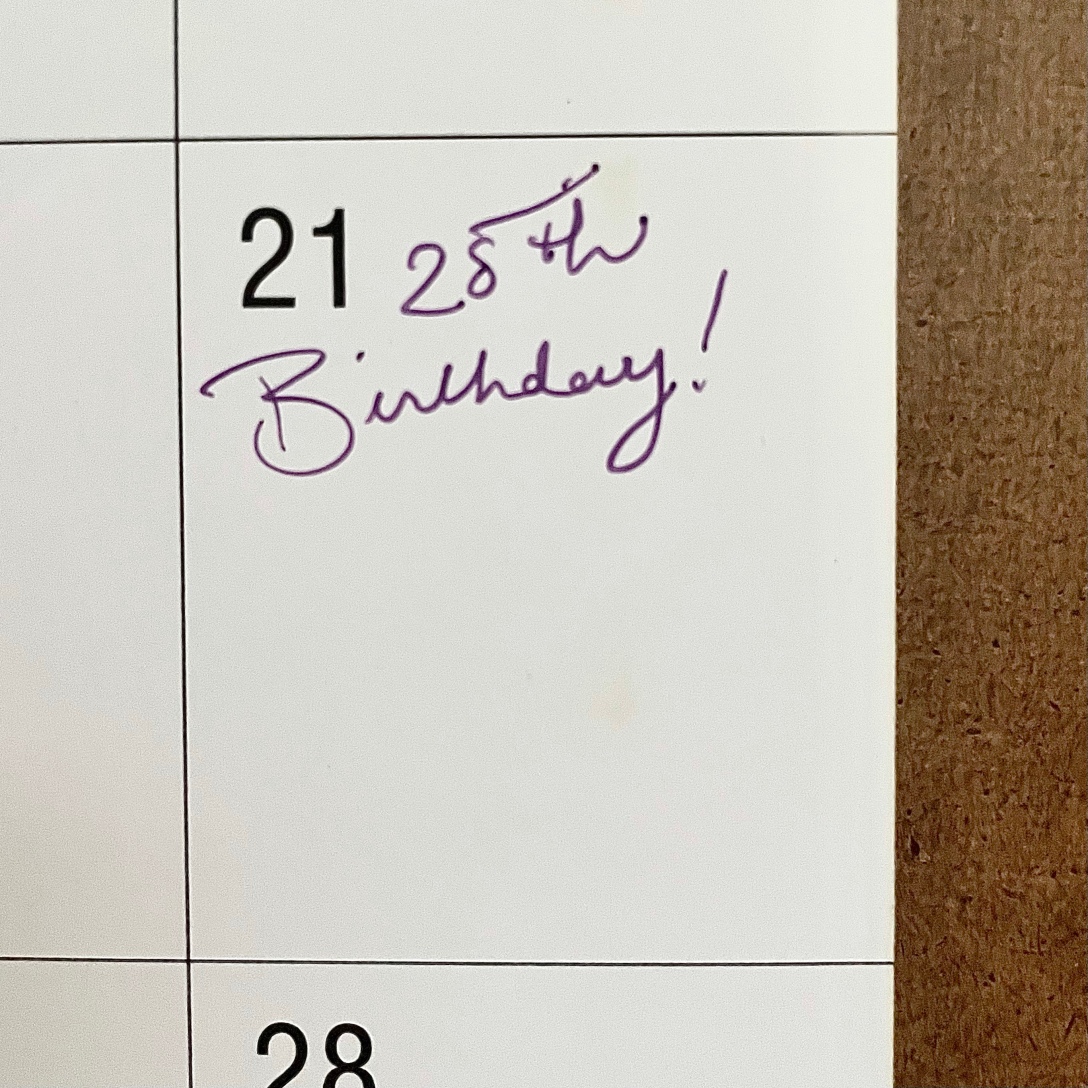 Featured Image: The calendar I haven’t really used since I moved into my apartment.

It’s my 25th birthday on Saturday. I’ve been dreading it since last year, especially when one loses an entire year+ of their twenties, aging just seems so unfair. When I was a young girl, I thought I’d be nearing an engagement by now, and I’d have a job I at least enjoyed– and I’m about as far from that expectation as you could possibly be. But I didn’t know what the adulting world was going to look like, so I can’t be too hard on myself.

I have been having a rough time with my mental health in the last couple of months. Maybe it was the ever-accelerating passage of time, the quickly approaching seventeenth wave of covid and quarantine, the job that caused me to have nightmares about excel spreadsheets, and the lack of support from friends. Or my brain just decided to relapse back into depression despite working so hard to keep it at bay.

I lost my best friend, 50% of my friend group, the guy I thought I was dating, and my job.

None of those friends, lovers, or jobs were any good for me in the first place, but there is still a grieving process that I have yet to fully go through. Instead of the normal denial – anger – bargaining – depression – acceptance, I kind of did a denial – depression – anger – mania – and currently working on acceptance.

The loss of my relationships all happened in the span of two hours, and so my body went into shock. When I had finally gone home and talked about it with an unbiased person, they were appalled. I realized that I was suffering a loss that might not be able to be remedied. I was depressed the next day and had to call a friend to do my dishes because I just simply could not move, or think, or make executive decisions. She came over right away and did my dishes and listened to what I had to say. She, too, was appalled.

And while I waited for some sort of apology or admittance that that was the wrong thing to do, I got angrier and angrier and there came a point where I didn’t even want to hear it. I knew only excuses would come and there was nothing anyone could say that could remedy the hurt.

That’s when the mania hit. I hung out with friends almost every day, and spending time with them made me feel better; they not only distracted me but reminded me that I am a good person.

Unfortunately, the mania hit too late to keep me from losing my job, and due to the week of being terribly unfocused, I was fired. Despite asking for an EAP (employer-assisted counseling) to better my mental health and focus, and letting my supervisor know I was going through a tough time in my personal life, and that it was my goddamn birthday this weekend, they issued no warning, and just let me go.

So I booked a flight to visit a friend in Florida, as anyone in a crisis would.

It’s not all bad, though. I get to start fresh, with as clean as a slate as one can possibly get. I get to create new relationships, platonic and romantic. I get to find a job that doesn’t give me stress rashes and nightmares. I get to take a goddamn break; I have time to work on my short stories for a little while.

This could be the blessing in disguise as tragedy that I needed to get my life on the path that I want it to be on. I wasn’t happy before anyways. I was begging for the weekend just to be let down by its lackluster.

When I was fired she said that I had tried my best. And I did. I did the best I could do with the cards that were handed to me but it just so happened that my hand sucked.

Buy me a drink for my birthday? It’s only fair, I lost my goddamn job:

Thank you to Tyla Jackson for doing my dishes. You have been an incredible friend, and I am so appreciative of your support and friendship.

Thank you to Aaron Bedard for listening to my woes for free. (Also: see his bands on the Support Your Local Artist page)

And thank you to my dad, who used his flight points to send me to Florida for only $11