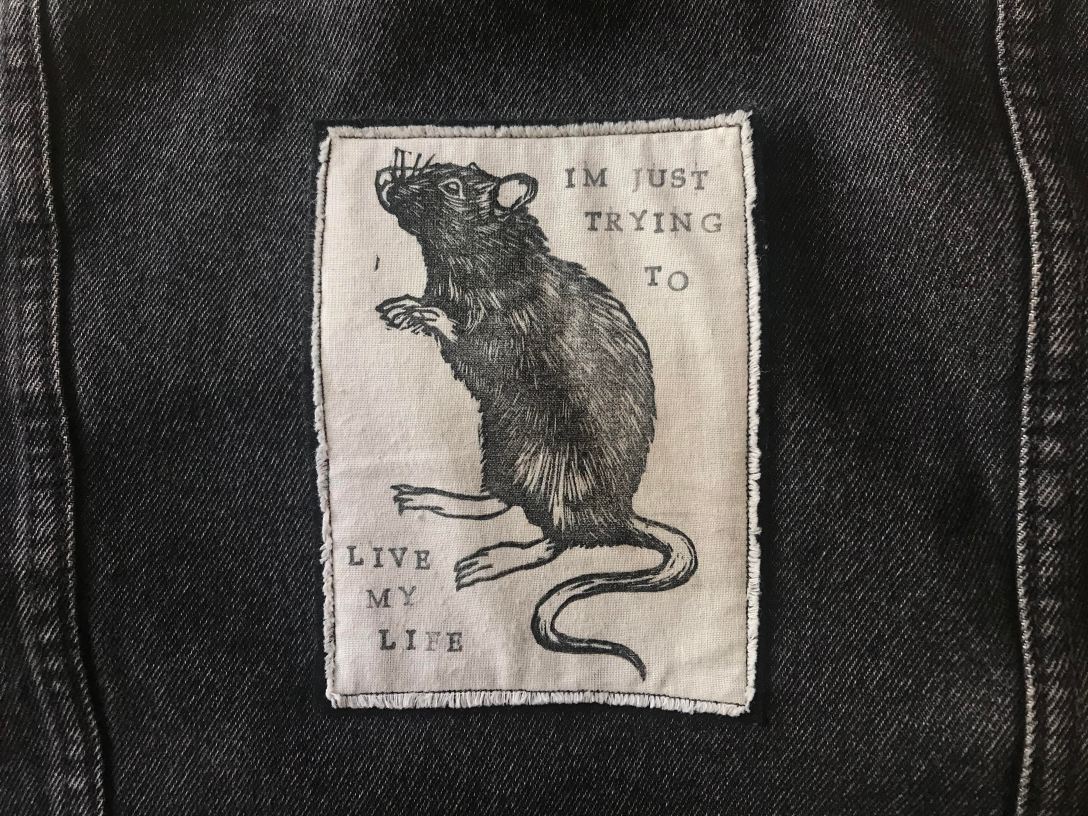 Featured Image: A patch I bought from Etsy that I ironed on to my denim jacket

The last thing a depressed person wants to hear is how they can “fix” it. And, yes, the chemical imbalance in your brain can only be tampered with so much. But, as a depressed person myself, saying it was an “incurable disease” was as much as a crutch as the things I used to do to deal with it. No, I didn’t wake up one day and consciously decide to be depressed, that was the work of puberty gone wrong. But once I was conscious of it, it gave me an excuse. When I had told my parents that I was depressed they got me a therapist. Frankly, I don’t blame the woman for almost immediately referring me to a psychiatrist; What does a middle-class fourteen-year-old white girl have to be depressed about?

Once I began seeing a psychiatrist and taking antidepressants, I remember asking him: When does it end? He told me that it was likely that I would have to deal with it for the rest of my life. This information was more crushing than the depression itself. At least with some hope, you can power through it, but knowing that despite good days, I would always, always come right back down, was devastating.

I took antidepressants for eight years. After graduating from college, which was a terribly tumultuous time for my brain, I decided to just… stop taking them. I decided that this was obviously not working for me. I decided that if I surrendered to the fact that I had this incurable illness that could not be stopped by anything and anyone, that it would hold me back from healing.

So this is what I did instead:

Guilty Pleasures Without the Guilt.

It is interesting to note the words I tell myself – “I will die.” I decided years ago that I would never consider suicide ever again, so this is not what I mean by “I will die”. I think some part of me assumes my soul will just die and my body will follow if I do not live the life I am meant to live.

So when I think about something I’d like to do, I just do it. I don’t care what people think of me. And this might sound awful, but I don’t even care if it hurts someone else’s feelings; my happiness is my utmost priority because it is not anyone else’s.

This one seems kind of obvious, but most of my life I tended to let people walk all over me. I let people use me, and got nothing out of it but anger. Lots and lots of anger. So much anger, I was having outbursts left and right because of years of pent up rage from never saying anything.

So when someone does something shitty to you, say something. They WILL think you are crazy but why would you want someone in your life that treats you like shit and then gets mad when you say something about it? (Also, that’s called gaslighting, which is an abusive trait, and you should avoid anyone who does this).

Some people will tell you “just ignore it” or “just block them” but nah. That ain’t it. Get it out. Get your frustration out on the person who caused it, or it will show up somewhere else.

I used to sleep most of the day; Anytime I wasn’t in class, writing essays, eating, or smoking weed, I was sleeping. I slept anywhere from 10-15 hours a day. It didn’t help. It made me groggy and more depressed because I was literally throwing away the “best years of my life” (college, was, admittedly, the worst years for my mental illness).

Even when I graduated, I worked multiple jobs with weird hours and never got to have a schedule. But when I sold my soul to a company for a cushy 40-hour workweek, I was forced into a schedule. Frankly, despite selling my soul for a 2020 Honda Insight, having a solid sleep schedule – 9 hours every night from 11-8 am – has done wonders for my brain. (I also highly recommend a weighted blanket; It puts you right out, and makes you have super vivid dreams.)

And not only the sleep aspect but I have my day back. I can wake up on a weekend morning and get all my chores and errands done before some of my friends are even awake or before football comes on.

When you make your schedule, look at the empty pockets of time, and fill them. When you’re just lying in bed contemplating the meaning of life, it leaves way too much time for you to decide that there is no meaning and that you should just die.

Have a plan every day, even if the plan is to rest. Make lists of things you need to do (people with depression are highly forgetful, so write it down before you forget) and try to check off as many as you can, even if it’s just one thing.

Make plans with your friends on your days off if you know your to-do list is too short to keep you occupied. The best thing for my brain is to have something to look forward to, even if it is just going for a drive with a friend.

Make plans with yourself, too. As I have said over and over again, time alone is precious. Say you ask your friend to go get drinks with you, but they say they’re busy… go anyway. Sitting alone at a bar is actually really fun because you get to eavesdrop on people (pro tip: bring a notebook instead of just sitting on your phone).

And make time for breaks, of course. No engine is supposed to be running constantly.

Yeah. Sorry. It’s scientifically proven that eating right and getting enough active minutes in your day is going to make you feel better point-blank-period.

I started cooking this year, and it’s been 1. Kind of fun and makes me wifey material and 2. It’s a lot healthier than buying premade foods all the time. I can make sure that I am getting the right nutrients in my meals and since I spent the energy making the food, I better damn eat it.

I’ve also started going for walks that commonly turn into runs. It’s become both exercise for me and also time for my brain to get the fuck away from my house which I’m stuck in, my family which I’m stuck with, and work which I can only get away from during my lunchbreak. And for those bouts of anger, I like to walk or run it off, and for the really bad bouts, go into the woods and complain out loud.

Let Yourself Sit In It

This seems counterintuitive, but there is great restraint to it.

When you feel upset about something, just feel it. Bathe in it. Cry about it. Throw your body dramatically onto your bed and curse the God that made you feel this way.

Like I said about pent up emotions, they’ll come out later if you don’t let them out now. A spilled cup of water will make you bawl your eyes out if you don’t cry about the thing that’s really bothering you.

But, like a bath, you can’t sit in it too long. My rule of thumb is not more than two days for something mildly upsetting, and not more than a week for something more severe. I cannot speak on dealing with the death of a loved one, or a traumatic experience, but those, too, need to be let go at some point. We can’t hold on to our grievances for too long, but we also cant lock them away.

Feel what you are feeling, but then put it into perspective, and then, if possible, fix it. Cry about it, and either let it go or do something about it.

Goals can be small, medium, large, short-term, long-term, it doesn’t matter. But you need them. One of the most pressing questions a person with depression will ask is what is the point of it all? I’m here to tell you there is no fucking point and so you better make one for yourself.

Recently I made a list of short-term (within the next couple years) medium-term (within the next ten years) and long-term (before I die). Some of my short-term goals include moving out and finishing my collection of short stories. The medium-term were things like buying a house, buying a Tesla, and writing another book. Long-term goals were things like getting published and becoming a professor. Each of these goals has mini-goals that build up to it, and those are the things you can work on every day.

Making steps, no matter how small, can eventually get you where you want to be. But not moving at all will leave you stuck in the unhappy circumstance you are in.

Oh, and Treat Yourself. Not too often that you get diabetes or credit card debt, but, buying yourself a cake after a bad week can’t hurt.