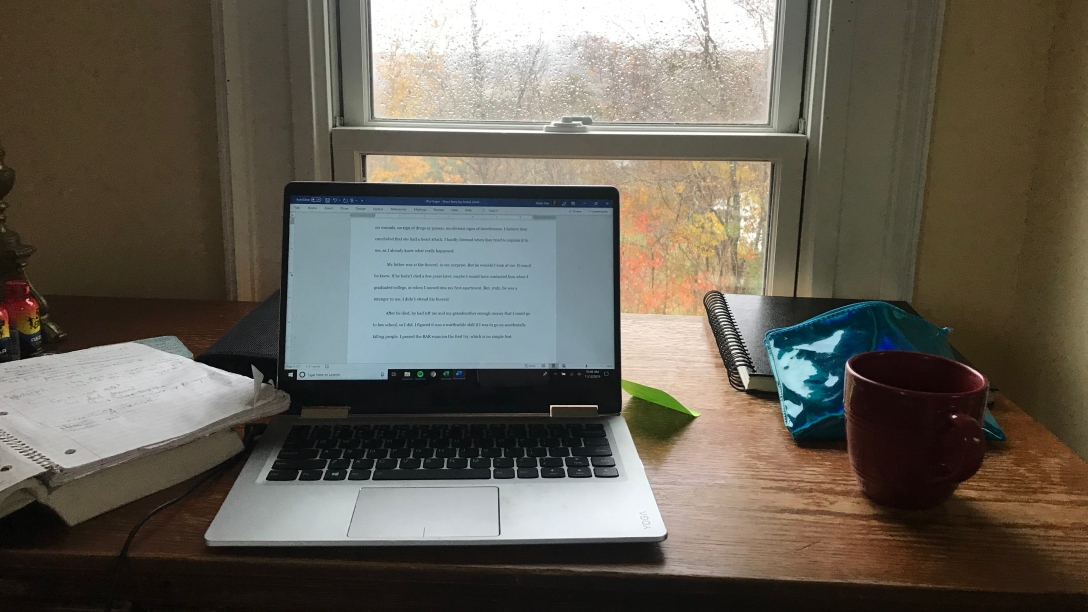 Featured Image: The view from my room at The Porches Writing Retreat

Published. Ah, even just the word sparks both fear and excitement in any writer. I have never been officially published anywhere, and that’s for lack of trying, but even if I did try, it would likely be for naught.

The publishing world is cut-throat. You could send your short story or novel manuscript out to dozens of magazines or publishers, and they don’t even have to respond (they may only send a letter with “postmark proving that his [or her] story was sent and actually existed as dark matter in the [publisher’s] space/time continuum.”) They also recommend not sending the original copy or anything of value because they won’t return it; it will be thrown away with the other hundreds of submissions. Unsolicited submissions get thrown in what the publishing world endearingly calls the “slush” pile, because its mostly full of trash and you’d have to do quite some digging to find gold. Unsolicited submissions, if that’s not clear, are mostly unknown writers who send their writing to a publisher who didn’t ask them to. These are usually “simultaneous submissions” as well, meaning a writer will send their story to many publishers at once, hoping to get a bite. Solicited means that a known writer was asked by a publication to submit their writing and they would likely get published. Most of the time, you cannot send something that has been published elsewhere, which also means, if you get accepted somewhere, you can never send that story anywhere else.

It’s extremely hard for an unknown writer to get published. According to David D. Comfort, The New York Times only publishes between 0 and .0000416% of short fiction slush. And in terms of novel manuscript submissions to any traditional book publisher? 90% of submissions get thrown out after just reading the author’s query letter, meaning their premise sounded like shit and it wasn’t worth even reading the damn thing.

Having worked on my university’s literary magazine, I know what it’s like to read a bunch of submissions that were mostly shit. Firstly, we were told that if the submission wasn’t sent in correctly (i.e. they didn’t put their name on the file, they used goddamn Comic Sans, they were over word count, et cetera) then they were immediately disqualified. Essentially, if you can’t read and follow directions, then fuck off. Secondly, genre mattered a lot, as it does with most publications. If a magazine has never published a mystery who-dun-it then they will not publish yours. If they’re asking for fiction stories only and you send them a biography of your grandma, it doesn’t matter how good it is, it’s not getting published. Thirdly, if there were too many grammatical, spelling, or structural errors, it didn’t matter much if the story was good or not; we just didn’t have the manpower to edit someone’s entire story, plus it said something about the organizational and writing skills of the sender. Lastly, I was wicked picky, and I’m not even a professional writer was only 19 at the time. I could read something and immediately know it was going to be a force to try to get through. Unfortunately, we had to read enough of each submission to give a short explanation on why they were or weren’t going to the next level. It was almost a blessing when they didn’t follow a specific rule because I could just say that, but when the story was shit and I had to come up with a reason that wasn’t just “this was shit,” it made my job harder.

Currently, I am putting together a collection of short stories. I was going to just self-publish, and market it myself, but as I spoke to one of the women here with me at my writing retreat, she momentarily convinced me to attempt to get it actually published. This lead me to some Googling, where I found out a short story collection had to be 40,000 words minimum (I’m at about 13,000). So that gave me the idea that maybe I would send each story out by itself to a magazine, but that means all the effort I put in to connecting these stories at a thematic level would have gone to waste. I went back to the collection-publishing idea but that only lead me to all the information I just gave you about percent chances of getting published. So, I’m more or less back to the whole self-publishing idea, especially now that I am growing this blog.

Self-publishing is kind of cool because it gives you independence in terms of how you want to market your book, and you keep more of the profits. You get to pick the cover and title without someone telling you that’s not going to work. You’re not on anyone’s deadline. You’re not a slave to expectations the publisher might have of you (just your own). Plus, it’s marginally better in terms of growing a brand for yourself.

I actually self-published a book in high school. It wasn’t very good in terms of grammar or structure, but it had a decent storyline. I didn’t have it professionally edited (which could cost upwards of 1000 dollars for a good editor and I was 15). I didn’t market it besides asking kids and teachers at my school and so I only sold thirty copies. But damn, was I proud of myself.

This time I’ll do it correctly, I hope. Or maybe I still will try to get Real-Published. Who knows? Stay tuned.